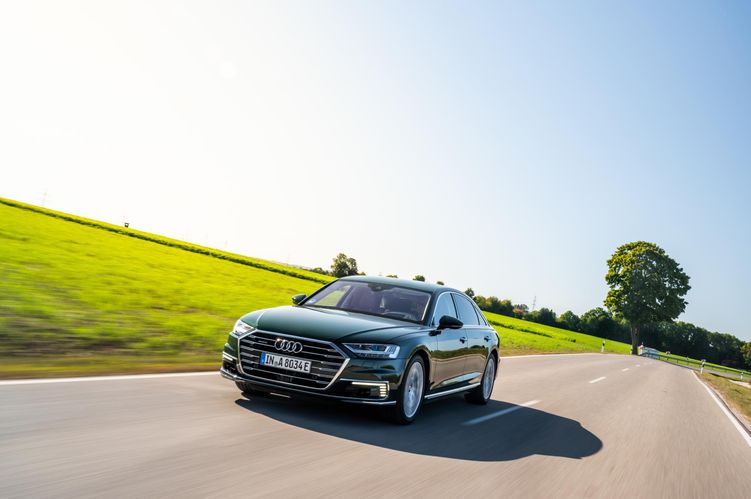 Audi have just released details of the Plug-in Hybrid version of the A8, which has a range of up to 28.6 miles on electric power only. The hybrid A8 will take the form of an A8 L 60 TFSI e Quattro, the extended wheelbase version will use a 3.0 litre V6 TFSI paired with an electric motor giving 449PS of system power and 516.3 lb-ft of system torque. The A8 L TFSI e will be available to order later this year, with first deliveries starting in early 2020, a standard wheelbase variant will be available a few weeks after the L model.

The turbocharged petrol engine has a power output of 340PS and 368.8 lb-ft of torque, it meets the latest emission standard Euro 6d temp. A permanently excited synchronous machine (PSM) will be used as an electric drive, with a peak power output of 100 kW and peak torque of 258.1 lb-ft. Mated to an eight-speed Tiptronic gearbox and the Quattro permanent all-wheel-drive system.

The power electronics converts the direct current from the high-voltage battery (HV) into three-phase current used to power the electric motor. Whilst in recovery, it works as an alternator which charges the lithium-ion battery. The battery is located underneath the floor in the luggage compartment it is made up of 104 pouch cells distributed into eight modules. The HV battery has a capacity of 14.1 kWh and has a voltage of 385 V. The full system's peak torque figure of 516.3 lb-ft is available at 1,250 rpm, with a 0-62mph time of 4.9 seconds achieved when both petrol and electric motor are combined, while heading onto an electronically limited top speed of 155mph. The A8 L TFSI e Quattro uses only 2.5 litres of fuel per 100 km, this meets the NEFZ standard, it will also be able to drive in full electric power only up to 83mph.

The plug-in A8 has been geared towards allowing the driver to use electric power only for a large proportion of their daily commute, the “EV” soft key allows the driver to choose when and how much the two motors interact with each other. When the car initially starts up it is in “EV” mode, full electric where the petrol engine only starts when the accelerator pedal passes a certain point. The hybrid system has two modes; “Auto” and “Hold”. “Auto” mode uses a predictive operating strategy when the route guidance is used on the MMI navigation, meaning the system will try to keep electric-only driving for as much of the journey as possible. “Hold” mode keeps the battery charge level at a constant level, only allowing minor fluctuations, using recuperation and by shifting the load point, making adjustments to the 3.0 TFSI management.