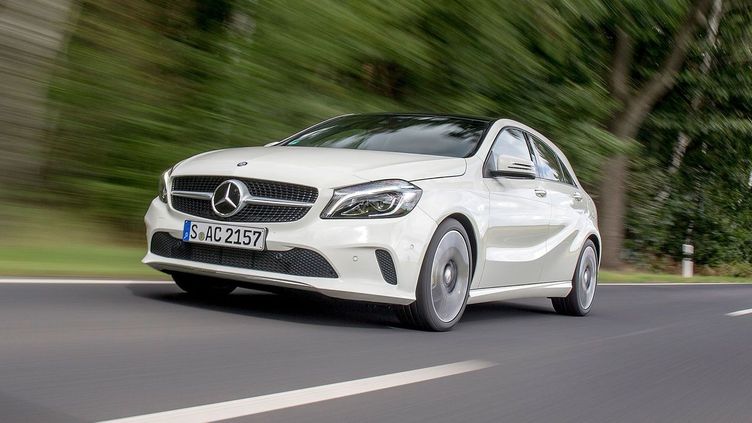 If you are looking for a fun, small hatchback but don’t want to give up the luxuries that you miss out on with a Ford/Volkswagen, the A-Class could be for you! This has been a very successful family hatch in the UK, surviving since its release in 1997, and with over 53,000 new sales recorded in 2019, the A-Class has become a very common sight on the UK road network.

What to look for?

With any used car, always make sure there is no significant body damage or curbed wheels. This can suggest it may have had a tough life and could have underlying problems. If you are looking at a pre-facelift model, aka one built before 2015, they are renown for being very problematic and not so reliable which may surprise a few considering Merc’s reputation, with diesel models finishing a dismal 25th/27 in the family car category for reliability.

It is also worth making sure all of the electrics work on the car before going ahead, as well as checking upholstery for damage, making sure the boot latches closed properly and listen out for interior ratting.

2013 saw the introduction of the 3rd iteration of the A-Class, which was infinitely more stylish and specified compared to its predecessor. You also had four options for petrol with 2 1.6-litre and 2 2.0litre engines offering good power, but you will need to own a small oil drilling company with the economy with the faster models! The diesels definitely offer the best blend of performance and economy with 3 options, 1.5-litre and 2 2.1-litre engines available.

A manual gearbox is standard on most models, but there is an efficient DCT auto box that is very quick. There is a dilemma with whether to go petrol or diesel, with the diesels being noisy and clunky but being vastly more efficient than the petrol models. Although the worst part about the A-Class is its unnecessarily firm ride which can leave most people with a bad back!

A 2014 reg A-Class with around 90k miles will only cost you about £7,500 and you’ll get a 6-speed manual gearbox, DAB radio and alloy wheels. If we are honest, pre-facelift models aren’t really worth the fuss they can cause.

The new facelift brought in more powerful engines, a new diamond design in the grille and a range of driving modes from comfort to individual. They also changed the badging for diesels, adding a ‘d instead of the CDI as before. The diesel models do outnumber petrol ones by about 2 to 1, meaning they are very good value. For example, you can pick up a 2016 A220d AMG Line with 40,000 miles for around £15k, whereas the A250 AMG Line would be upwards of £17k. New they would cost about the same.

A major beneficiary of the facelift was the SE trim, which gained a media interface, 16in alloys, a reversing camera and Mercedes’ upmarket Artico upholstery. Other models such as the A220d received a boost in power too. Arguably the biggest surprise was that there was still no standard digital radio, it remained a £420 optional extra!

The back seats remained too small for Bilbo Baggins and couldn’t be tolerated for more than a 10-minute drive. The boot space is actually very good, especially with the seats down, however, the poor boot door design meant getting anything in was a challenge! The interior will give you a much classier feel than its competitors and higher quality of material used tells you where your money goes.

Insecure seat backrest – This may sound terrifying, but this only affects models built between June 2013 and July 2013 and only with cars fitted with AMG line seats.

Oil Leak – On certain diesel models built in 2014, there is an O ring that can let oil leak out and damaging the environment. In a worst-case scenario, it can lead to the engine running with little oil and causing a lot of internal damage.

Loss of drive – The driveshaft may detach from the wheel hubs on certain models built before June 2013 causing a sudden loss of drive. Thankfully, the brakes and steering remain unaffected, allowing you to bring the car safely to a stop.

Duel-clutch gearbox failure – A poor weld of a component inside the gearbox of cars that were built between October and November 2015 and came equipped with a dual-clutch automatic gearbox can either crack or fail. This can lead to the car going into limp home mode or losing drive completely.

The 2.1-litre diesel may not be the smoothest to drive but its definitely got the grunt to keep you happy and with the AMG trim, it looks very stylish and the interior is lovely. If you want a powerful hatch that won’t burn a hole in your wallet every time you visit a fuel station, and with a little extra flare, this model could be a good fit.

Mercedes have 2 main rivals, both German and both have a direct competitor to the A-Class, and I am sure you know which they are. Audi have the ever-popular A3, while BMW have their fun, rear-wheel drive 1 Series. It all depends on what you are looking for from your car.

The A3 is a brilliant all-rounder, with decent economy statistics, comfortable suspension, large boot, 4-wheel drive, and plenty of room in the back seats. You can pick up good quality a 2016 model with 80,000 miles for less than £10k.

The 1 Series popular for its signature BMW rear-wheel drive, making it quite good fun to drive! It won’t be as practical as the Audi or even the Merc but offers a more driver-focused experience. You can also pick up a 2016 shape with 75,000 miles for £9k.

Is the A-Class a reliable hatchback?

Overall, the A-Class is a decent car with plenty of spec and remains a very popular second-hand car. Although Mercedes as a brand ranked very poorly in the What Car? reliability survey, ranking 26th out of 31 manufacturers. In our opinion (which is super duper important…) you can get much better value for money with a second-hand Audi or BMW.