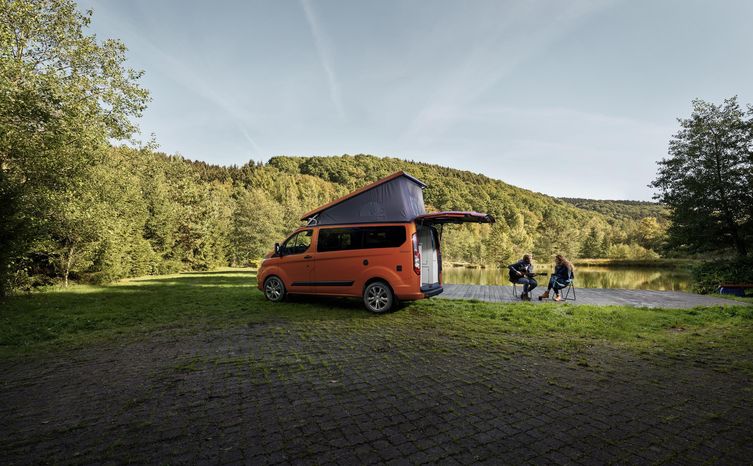 Ford has released the adventure orientated Transit Nugget camper in the UK market. Ford have teamed up with Westfalia who have converted the Transit Custom into a well-equipped camper van. The Nugget is already a well-received camper in Germany.

As the Nugget is based on the latest Transit Custom it has the latest technology on-board including the SYNC 3 infotainment system, keeping the driver connected while out in the wild. The Nugget camper has two double beds, one folds out in the roof space while the other is located in the living area, comfortably sleeping up to four people.

The Nugget has a three-room layout thanks to its adjustable tilt roof, giving an L-shaped kitchenette in the rear, a living/dining area in the middle and sleeping quarters in the roof. Throughout the passenger compartment, a wood-effect floor is used, which is easy to clean, making it perfect for the outdoor nature of the vehicle. The addition of an auxiliary heating system keeps the occupants warm at night.

In the kitchenette a double-burner gas cooker and chrome-nickel sink allow for hot meals to be prepared, a 40-litre compressor fridge also lives in the kitchenette. The Nugget has two 42-litre water tanks onboard for fresh and waste water, the tanks also feed an outdoor shower at the rear. In the living/dining area, five people can fit around the table, three on the bench seat, then the driver and front passenger seat can swivel by 180 degrees.

Under the bonnet, Ford's latest 2.0-litre EcoBlue diesel engine has been used as it is fuel-efficient, refined and has greater low-end torque. Available in 130PS and 185PS specs, with the 185PS version being available with either a six-speed manual or SelectShift automatic transmission. Ford has brought across some of the latest technologies seen on their passenger cars including; Cross Traffic Alert, Pre-Collision Assist with Pedestrian Detection, rear wide-view camera and Adaptive Cruise Control.

The Transit Custom Nugget camper will be on show at the Motorhome and Camper Show 2019 at the National Exhibition Centre in Birmingham on the Ford stand and is available to order now.