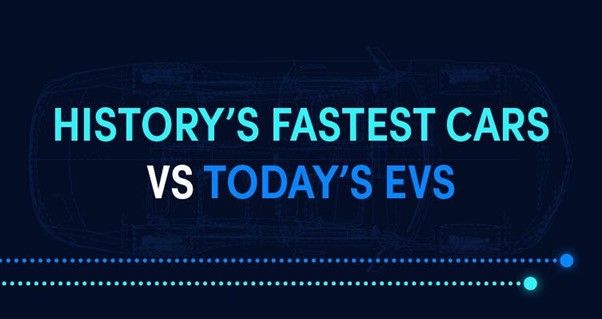 Every day, more and more drivers opt to get behind the wheel of an electric vehicle. Stats show that, despite the impact of COVID-19, which unsurprisingly saw EV sales drop, sales today are once again on the rise, up 168% this year according to EV-Volumes. And, for those who have got themselves an electric vehicle, the main comment is always the same, drivers’ are shocked by how quick these vehicles can accelerate.

Here at CarMoney, this got us thinking. How fast are today’s EV’s compared to both modern day’s fastest cars as well as the fastest cars throughout history?

In order to get a real understanding of how fast Electric vehicles are, we decided to compare their acceleration times against the fastest cars of all time, in particular the ones that broke the top speed record.

This image is created under the Creative Commons Attribution - Share-Alike 4.0 International Licence. https://creativecommons.org/licenses/by-sa/4.0/

The graphic above shows just how far modern technology has come.

Here you can see all the cars throughout history that have held the top speed record for a production car and compared their 0-62 mph times with the electric vehicles that are available today. And as you can see, there are a lot of reasonably priced cars that are now capable of blitzing their previous record-holders off the line.

At the top of our list from the EV side is the Porsche Taycan Turbo S. This car is seriously fast. It’s only 0.4 of a second from matching the current record holder, the Bugatti Veyron Super Sport’s time of 2.4 seconds, only 0.2 off the 2017 holder, the Koenigsegg Agera RS and 0.1 of a second off matching the 2007 record holder, the SSC Ultimate Aero that has a time of 2.7 seconds. It is, however, despite being slightly slower than the latest three holders of the production car top speed record, quicker than the McLaren F1, which held the title in 1993. The most surprising element of this is that the Porsche is cheaper. A lot cheaper. The Taycan is over £1.6 million less than the Veyron was when it was released, which makes its 2.6s time even more impressive.

The surprising sats continue when you look further down the graphic. Take the brilliant looking new Hyundai IONIQ 5 Project 45 as an example. This new hatchback, which can comfortably be used for families and boasts comfort and relaxation, can reach 62mph faster than you can in a Lamborghini Countach, the fastest car in the world back in 1982.

The graphic shows how far we’ve come in general too. In 1949 the fastest car in the world was the Jaguar XK120, which could reach 125mph and had a 0-62pmh time of 8.5 seconds. By modern-day EV standards, this time can be smashed by cars of all shapes and sizes, which when it comes to ICEs wouldn’t necessarily be possible. For example, the Kia Soul EV, the Hyundai Kona Electric, MG’s MG5 EV, the MINI Electric and even the Nissan Leaf e+, all can boast sub eight second times.

Next, we thought we’d look a little further ahead and see how some of the fastest and most iconic sports cars and the modern era will match up against the EV market by 2023.

This image is created under the Creative Commons Attribution - Share-Alike 4.0 International Licence. https://creativecommons.org/licenses/by-sa/4.0/

As you can see from the graphic above, it appears that Tesla will start to dominate the roads when it comes to the fastest cars from 0-62. By the year 2023, not only will Tesla be topping the 0-62 timesheets, they’ll likely be competing with themselves. Their new Model S Plaid and Roadster models, expected in 2022 and 2023 respectively, will both be exceptionally quick off the mark, boasting 0-62 times of 2.1 seconds, with the Model X Plain (2022) only slightly behind with a 2.6 recording.

These times are miraculously fast, especially when you compare them against other iconic cars of the modern era. Tesla’s new Roadster will be half a second quicker than both McLaren’s 720S and Senna models and over a second faster than one of the most popular supercars around, the Lamborghini Haracan.

Perhaps even more surprising is that Tesla can produce similar performance out of a truck. Yes, their world-famous Cybertruck, due in 2023, can’t quite keep up with their new Roaster but it still records an eye-watering 0-62 time of 3.0 seconds. That’s faster than a Porsche 911 GT3 RS!

Aside from Tesla, Porsche is the other manufacturer that is showing some of the leading supercar makers what's possible. Their Taycan Turbo S, which is available now and can comfortably fit passengers in the back, costs just shy of £140,000 and matches other competitors’ elite line of ICE supercars, such as Ferrari’s F8 Tributo priced at £203,586  and Lamborghini’s ever-popular Aventador SVJ, which is around two and half time as expensive at £360,000.

Further down the table, there are still some incredible times. Take the 2022 Mercedes EQS AMG 53 4MATIC+, recording a 0-62 time of 3.4 seconds. This saloon car is being tailored for the executive businessmen and women of the world. Its main purpose is to get you to and from your meetings in style and comfort, and yet can reach 62mph faster than you can in an Aston Martin Superleggera.

Kia is also a name you very rarely see when looking at 0-62 times. Their new EV6 GT, which is being released next year, is priced at around £58,295 and is suitable to be used for small families, records a time of 3.5 seconds, which is the same as you’d get out of the £157,900 Bentley Continental GT and 0.1 of a second quicker than the £229,935 Mercedes-Benz SLS AMG Black Series.

As you can see, the speeds capable of EV’s are truly staggering. And with more and more cars being developed using electricity and the surrounding technology that utilises this power, supercar manufacturers will soon find their cars being matched off the line by family saloons that cost a quarter of the price. We’re in for a really interesting few years!

If you’re wanting to get your hands on an electric vehicle, CarMoney is ready to help you. We compare the UK's top car finance lenders so you don't have to. We also make it super easy to get behind the wheel, fast by taking care of all the paperwork. All you need to do is choose your new car and drive away happy!

You can quote here or if you have any questions, contact our incredibly helpful team who are always around to help out however they can.

Here is the methodology followed for this piece:

The definition of a production car, for this list, is a car that;

Additionally from the above, cars should also;