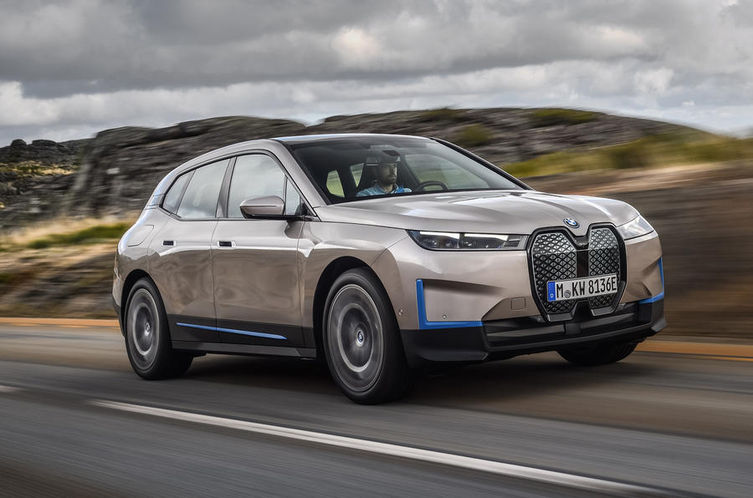 Yes, the BMW electric range continues to grow as they add the new all-electric BMW iX to the line-up. Still under final development, the iX won’t hit the dealerships for another 12 months, but BMW describe it as the ‘dawn of a new era’ for the manufacturer. More or less it is a production version of the iNext concept that we saw flashed about in 2018, the iX should cost around the £100,000 mark. And for that money you are getting 500bhp produced from a 100kWh battery, 376-mile range and sophisticated 5G tech.

This new EV uses BMW’s 5th Gen eDrive motors which are more compact that ones on the likes of the i3. The 100kWh battery powers two motors on either axle pulling the SUV from 0-62 in less than 5 seconds. Not only is the battery powerful and compact, but it has an extremely impressive range for an all-electric car! BMW have also claimed that you can charge the battery at a rate of 200kW meaning you can reach 80% charge in 40 minutes. Although a more conventional 11kW wall-box charger will fill it up from flat in under 11 hours.

An all new platform beneath the iX has been developed with the focus on future EV’s and better automated driving functions. BMW claim it has 20 times the computing capacity of any other production car they have on sale. You can imagine this vehicle to be comparable in size to the X5 but with a load carrying capacity more towards the X7. Aerodynamic improvements include minimal air ducting within the front bumper, flat underbody panelling, integrated door handles and the tapered glasshouse to significantly reduce drag.

Other than the top-of-the-range twin motor 4x4, BMW are yet to release any info about variants to this model. It has not been confirmed but the iX will distribute the power between the axles although knowing BMW, it is likely to be rear drive biased. With a battery like the one here, it is no surprise to see this car topping out at over 2.5 tons!

The interior continues the futuristic design of this car with a multifunctional hexagonal steering wheel, flat floor and new slightly curved instrument cluster and infotainment screens. The iX also comes with a new microfibre fabric for the seats and removes the old centre console making room for a high armrest that has the iDrive controller at the top. “It’s not switchless but it has less switches [than other BMW’s]”

So, if you like the sound of this, you’ll only have to wait 12 months (maybe even less) for it to hit the dealerships around the UK late next year. Hopefully BMW will release some more details in the coming months, but I think it is fair to say from what we have heard, that this could be the largest step towards an all-electric future for BMW, and the industry as a whole!