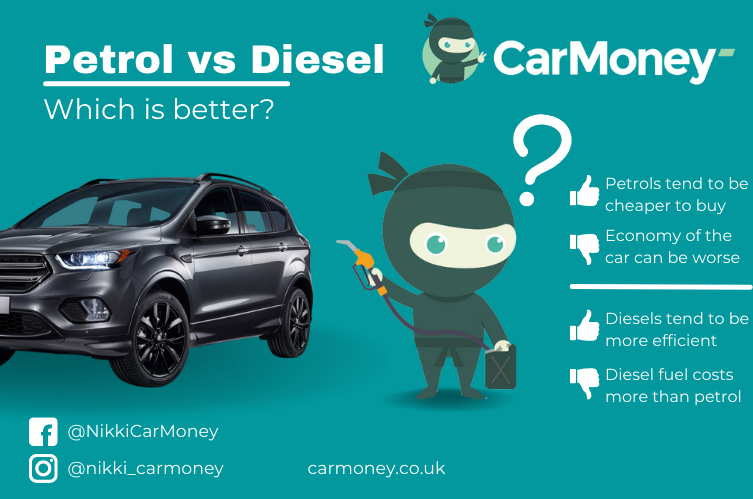 Picking between petrol and diesel power doesn’t just affect how much you pay when you refill your car at the pump. It will impact your economy, your performance, the criteria of your MOT, and other real-world running costs like tax. And looking a bit further ahead, the sale of new cars powered wholly by petrol or diesel will be banned in the UK by 2030, while hybrid cars could continue to be sold until 2035. This could affect which car you choose to buy.

But are petrol cars really cheaper than diesel? Or vice versa? The truth is, most of the time, a petrol car is indeed cheaper to buy. But this is not a strict rule. New car sales slumped during the pandemic, and diesel cars have been hit especially badly. Previously incentivised by consecutive governments for apparent CO2 advantages, they have recently been demonised as we all learned that real-world emissions from cars have been consistently under-reported.

So why are diesel cars more expensive to buy? A key factor is that diesel engines usually require extra hardware that petrol ones don’t. To reduce emissions and comply with stricter EU laws, devices such as AdBlue-reliant selective catalytic reduction (SCR) systems often have to be fitted. And these cost money!

Diesel cars have more torque than petrol ones, meaning that their pulling power is greater. This makes diesel cars ideal if you regularly tow a trailer or caravan. It also means that they may be able to overtake other cars faster. Petrol cars, on the other hand, require more gear changes when overtaking. Diesel engines are generally noisier than petrol ones, though.

You'll also find that nearly all new diesel cars for sale in the UK today feature turbocharging, which further smooths out the engine note. And besides, modern cars feature plenty of sound deadening around the engine bay and interior to help reduce engine noise, so even if a new diesel car sounds a bit gruff from the outside, it's likely the occupants will hardly be aware of the noise.

Petrol engines tend to need to be revved higher in order to extract maximum performance. However, with many manufacturers replacing naturally aspirated petrol engines with smaller capacity turbocharged units, this is less of an issue.

In principle, a diesel engine is a simpler form of combustion powerplant. But manufacturers have invested huge amounts of development cash into diesel engines in recent years to help them deliver smoother power and cleaner emissions, and most experts would agree they tend to feature technology that’s more expensive to replace than their petrol equivalents.

On average, a modest family car with a diesel engine will cost around £1,500 more to buy than its petrol-engined equivalent model, and as a rough rule of thumb will be worth around £750 to £1,000 more when it comes to reselling it (assuming a typical ownership cycle of three years and 30,000 miles).

Whenever you pull up at a petrol station, you almost certainly will have noticed that diesel is more expensive per litre than unleaded petrol. The average cost of petrol in the UK is 113.9p per litre; diesel costs an average of 117.2p per litre.

Luckily, the average fuel economy of diesel engines more than makes up for this, meaning that, with regard to fuel costs at least, they are cheaper in the long run. For example, over 10,000 miles, the diesel-powered 1 Series 116d SE should cost around £827.06 in fuel; the petrol 118i SE should cost £1118.38.

Can't Decide? Why not go Hybrid?

If neither a petrol nor diesel model is drawing you in right now, there are other options you can consider, such as getting a hybrid car. These combine a combustion engine (usually a petrol one) with an electric motor to give it more than one source of power. They’re also much more economical than a petrol or diesel car and – because they emit less CO2 than cars powered by fuel only – tend to be cheaper to tax.

While petrol, diesel and hybrid cars make use of a combustion engine, electric cars are powered solely by electric motors and batteries. They have a number of advantages over your traditional combustion engine. They’re quieter for a start, not making the same rumble as you’d hear from petrol- or diesel-powered car.

Electric cars are cheaper to keep and maintain, too. While topping up a 50-litre tank with diesel would set you back an average of £58.60, charging a 100kWh Tesla Model S from empty to full at a public charging point would likely cost around half that. Plus, because they create no harmful emissions, electric cars are exempt from road tax!

The environmental impact of diesel engines has been called into question in recent months. When lawmakers, in their wisdom, decided to impose car tax structures based on carbon dioxide emissions. CO2 is linked to global warming, and while diesel cars emit less of it than petrol cars, the waters have become rather muddied in recent years with the Volkswagen ‘dieselgate’ scandal and its ripple effect.

Diesel engines are good on CO2, but they produce lots of other pollutants such as nitrous oxides (NOx), hydrocarbons and soot particulates that are linked to asthma and other breathing conditions. Many experts now consider the CO2-based tax system to have been ill-considered, and there's a push for tighter controls on the exhaust emissions that diesel cars produce more of.

Many drivers love the mid-range flexibility and pulling power that a diesel car delivers. They also feel smug during their rarer visits to the filling station! Enthusiasts will enjoy the smoother, free-revving nature of a petrol engine, especially the torquey units now being offered on the majority of new cars, while everyone else will enjoy the refinement and avoid the extra costs of all the extra tech that diesel engines need to make them clean and efficient.

The reality is that when 2030 comes around, it looks like we will have to say goodbye to all new petrol and diesel models being released in the UK. This is a big change in the industry, but it affects all of us. We want to know your opinion on the future of motoring! We have a short 5-minute questionnaire about EVs and your opinions of them as a whole ????