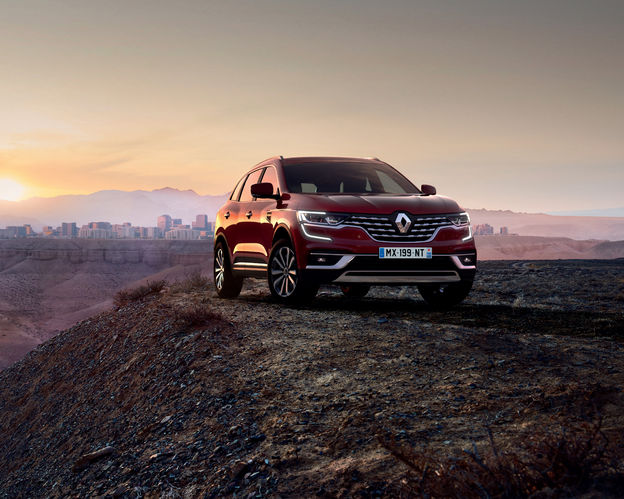 Renault unveiled the new Koleos at the Shanghai Motorshow back in April and it is now available to order, prices start at £28,195 with the first cars will start to arrive in November. Renault are adding new engines, edgier styling, more safety features and added refinement to the range.

A pair of new Blue dCi will be used giving increased power and economy compared to the engines being used currently. The 1.7-litre Blue 150 engine will be available with a front-wheel-drive powertrain however the 2.0-litre Blue dCi 190 is used in conjunction with Renault's All-Mode 4x4-i system giving the Koleos improved off-road ability.

Both of these new engines will be mated to Renault's Continuously Variable Transmission (CVT), with the max torque being available at 1,750rpm, the 150 producing 340nm and 190 with 380nm, allowing faster accelerations than before. The entire range now has Renault's hands-free parking, taking the stress out of parking.

The Koleos has received some subtle styling changes; Pure Vision LED headlights, coming as standard over all trim levels, giving the front-end revamp along with a larger grille, newly designed bumper and larger skid plate. The rear has also had an update, including; a new rear bumper design and larger high-level brake-light. A new metallic paint colour has also been made available on the update; “Red Vintage” as well as a new two-tone alloy wheel design available across the range.

New features have been added on the inside too, including; soft-touch material and satin trim. A new standard feature in the back, on all trim levels, is two-stage reclining seatbacks. A new pedestrian detection system has now been added to the Active Emergency Braking System (AEBS) concludes the new technology being used.

Two trim levels will be available; ICONIC and GT STYLE and both the new Blue dCi engines can be spec'd in either. The ICONIC will receive 18” two-tone alloys, where the GT LINE will have new 19” wheels as standard. GT LINE also give you a powered tailgate, heated and electric front seats and an 8.7” portrait infotainment screen.