Crash Cities | Where do the most accidents happen in the UK 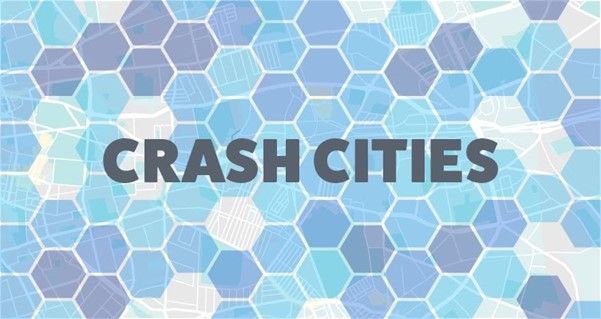 Here at CarMoney, we see a lot of data and research that goes into highlighting some of the most dangerous roads in the UK, but these tend to be major motorways rather than in city centres, so we thought we’d do our own bit of digging to see which out of the 10 most populous cities in the UK had the highest number of accidents over the last 10 years.

A Decade Of Car Accidents

Here are all the accidents that have happened in the top 10 most populous cities in the UK over the last decade. “Slight” accidents are when a bump or shunt has taken place and “significant” indicates when a serious or fatal incident has occurred.

* City centre and surrounding areas up to a radius of around 2km.

Crash Maps
Below we have taken all the accidents that have occurred over the last decade in each city
and plotted them on a heat map, so you can see which areas are the most susceptible to car
accidents.

Each city also has 5 roads most common for significant accidents. These being anything considered serious/fatal, and the number beside them represents the number of significant crashes.

London Over The Last Decade 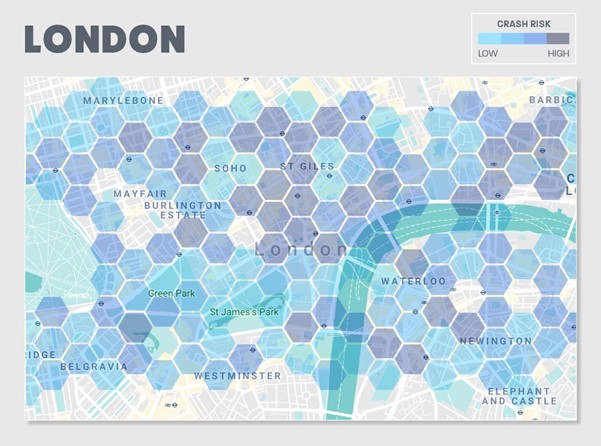 As you can see from the map, London’s condensed and chaotic nature means that a risk of
an accident is widespread across the city. A key location that sees the highest density of
collisions is around the Leicester Square area, which saw around 35 significant and 166
slight accidents occur over the last decade.

Birmingham Over The Last Decade

Similar to London, Birmingham’s spread of car accidents is quite wide, due to the city’s size.
However, the main area that sees the most crashes surrounds the city centre area as well
as both the Chinese Quarter and Gas Street Basin areas.

These areas have a combined crash count of 738 slight and 144 significant accidents over
the last decade.

Leeds Over The Last Decade 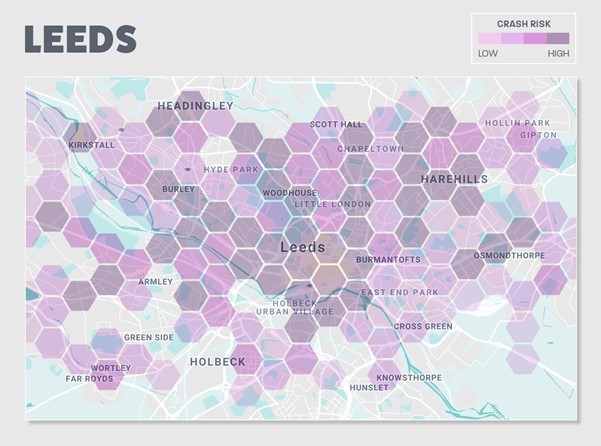 The crashes accounted for in Leeds seem to happen close to the city centre and even more
so around the Briggate area of the city. In particular, the Vicar Ln and New Market St roads
alone have seen around 30 significant accidents happen over the last 10 years, with 9 of
those happening at the lights at the Kirkgate and New Market Street traffic lights.

Leicester Over The Last Decade 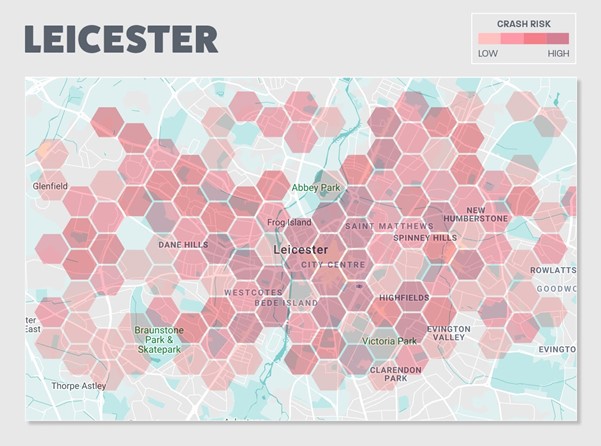 Leicester’s heat map shows a similar scenario with many of the significant crashes
happening around the city centre areas, but it’s far more condensed in relation to the rest of
the city and surrounding areas.

As stated, the main area of concern is the city centre, with 284 significant and a massive
2094 slight accidents, all situated around a 1km area. You can also see that the A607 road
that comes into the city is a hot spot for accidents with 5 significant accidents all occurring
around a pedestrian crossing near the Empire Banqueting & Conference Hall.

Bristol Over The Last Decade 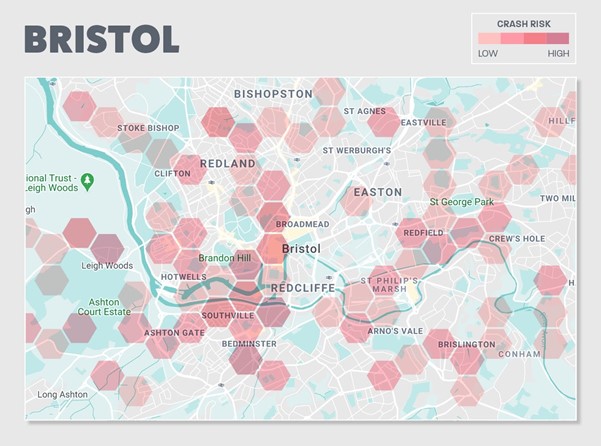 As you can see from the map, Bristol has a much more scattered area of significant
accidents over the last 10 years, meaning the city centre is relatively safe in comparison to
other cities on this list.

However, there are some hot spots that do seem to be the site causing the majority of
accidents, such as the west side of the Broadmead area, from the Bear Pit down to the area
around Queen Square.

Nottingham Over The Last Decade 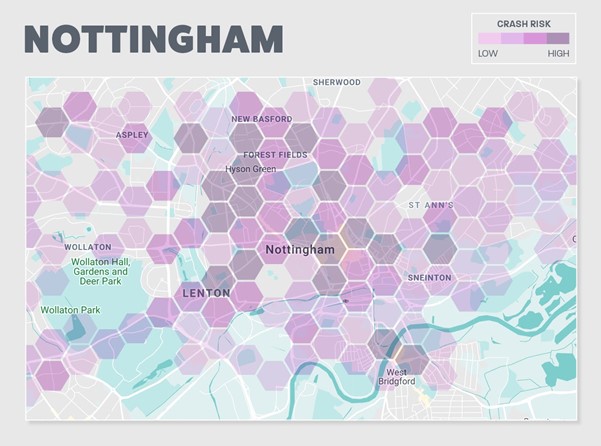 Nottingham sees significant accidents spread high and wide across the city and surrounding
area. As usual, the main specific area where most accidents are happening is around the
city centre, but there’s also a large portion of significant accidents happening up and around
the Hyson Green and Radford areas, totalling just under 600 collisions over 10 years.
Alfreton Rd and Gregory Blvd are hot spots for accidents in particular.

Liverpool Over The Last Decade 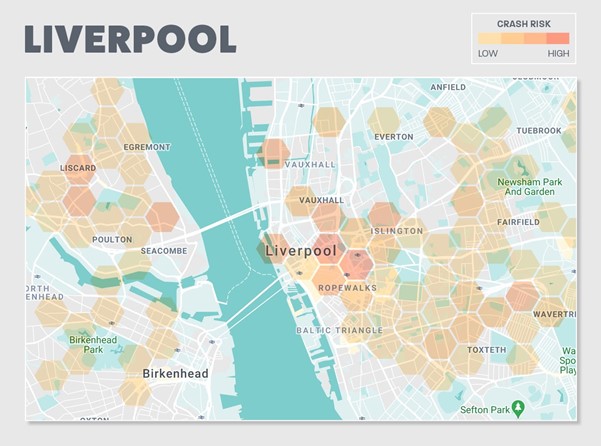 There are two main standout areas where a lot of accidents in Liverpool happen, the first
being the area in and around the two railways stations, Liverpool Lime Street and Liverpool
Central, and then the area around Victoria Street on the other side of the Liverpool One
area.

The worst street is Hanover St, which has seen around 35 significant accidents occur over
the last 10 years.

Glasgow Over The Last Decade 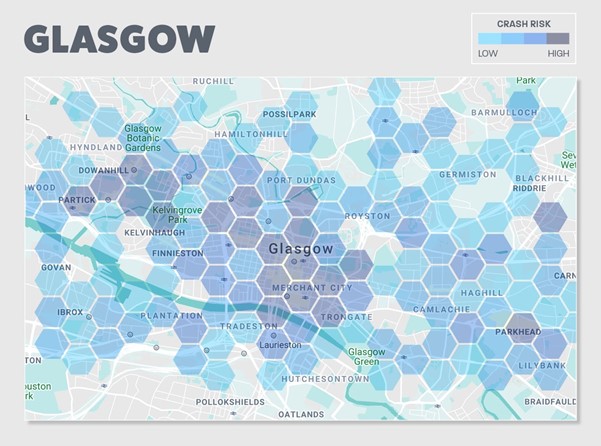 But there is one other location that sees a high amount of accidents located slightly outside
the city centre to the west. Roads like Dumbarton Rd and Byres Rd, surrounding The University of Glasgow, both see a very large number of accidents.

Sheffield Over The Last Decade 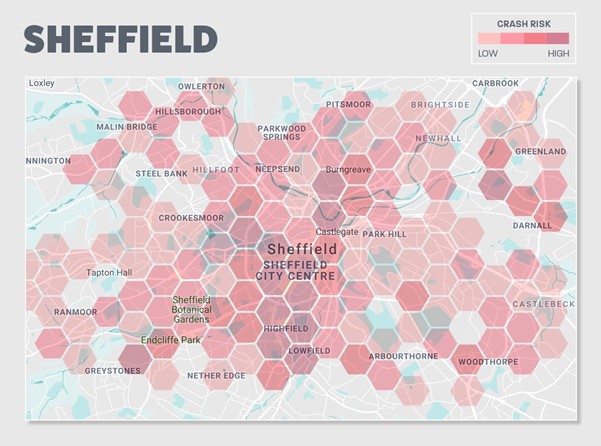 Sheffield’s crash heat map shows a more natural display of significant accidents happening,
with a more concentrated area being affected in the city centre and then gradually
decreasing as we move out to the surrounding areas.

One particular area that sees a high volume of accidents taking place is the A621 that
passes by Sheffield’s Bramall Lane stadium. Many accidents occur as you drive past this
stadium, which then worsens at the roundabout that connects the road to St Mary’s Gate
and St Mary’s Rd. This roundabout alone has seen 52 accidents over the last 10 years.

Edinburgh Over The Last Decade 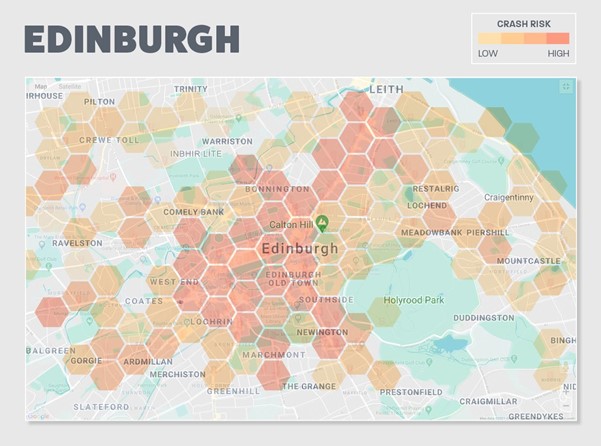 With Edinburgh, most accidents happen in and around the city’s New and Old Town areas,
up to the other end of the Princes Street Gardens, the most popular parts of the city. What
wasn’t predicted was to see the number of accidents that occur on the A900, the road in
between Edinburgh and its coastal neighbour Leith. This road has seen around 35
significant crashes, jumping to over 200 minor collisions over the last decade. The
intersection between the A900 and A901 also sees a very high number of accidents, with 40
minor crashes taking place at this one spot.

As you can see from these heat maps, city centres can be a lot more dangerous than
motorways and main roads. So, if you’re driving through a city centre, regardless of how
much slower you may be travelling due to condensed traffic, remember that you’re still
driving through high-risk areas and should always remain alert.