What does Smoke from your Diesel Exhaust Mean? 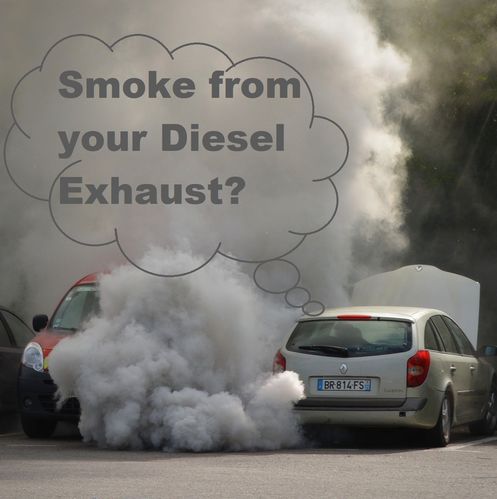 We would not suggest you keep driving it as normal until you have diagnosed the problem and made sure it is non-threatening.

What do different colours of smoke mean?

This means your car is burning oil, which can be a sign to tell you to add oil to your car as soon as you can. If the grey or blue smoke is more prominent when you step on the accelerator, it’s a telltale sign of burning oil.

Giving your engine some TLC is the best way to prevent grey and blue smoke, by removing built-up soot and varnished oil. Taking steps to lower the engine temperatures and making the engine run more efficiently is the way to go.

White smoke can often be a sign that your car is in very bad condition. If the white smoke is thick and long-lasting, the engine is likely burning coolant. It could be linked to problems such as a blown head gasket, damaged cylinder head or cracked engine block, all of which will cost a lot of money to repair. White smoke may also be the cause of the engine being too cool to burn the fuel.

Seeing a qualified mechanic is advised to properly identify the issue, as white smoke could mean there’s a serious problem such as the engine needing to be replaced.

Black smoke is often evidence that your car is burning too much raw fuel. This could be for a number of reasons, such as a leaking fuel injector, a failed engine sensor, or a defective fuel pressure regulator.

Clean the air system and check your engine rings, as well as the fuel supply itself. If issues continue, you should consult a specialist.

Diesel cars are getting a bad rep these days! With all the scandal and controversy around fossil fuels and the move towards electricity and other forms of power, their reputation has taken a hit. But let’s not forget that diesel cars are usually a lot more efficient than their petrol counterparts as they burn their fuel slower. Plus, they are now kinder to polar bears than most petrol cars!

We love helping people find a new car finance deal, and we are proud of what we do! Why not have a look through our classifieds and search Fuel Type > Diesel and see what options could suit you!

Or try our no-obligation car finance calculator and see if you could be accepted by one of our panel of lenders!